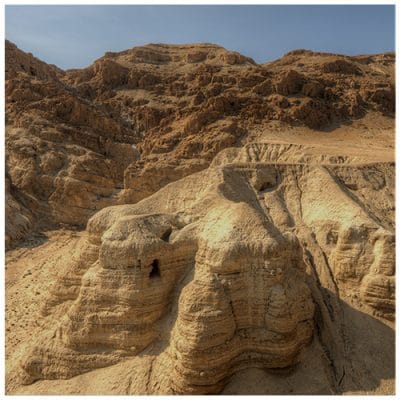 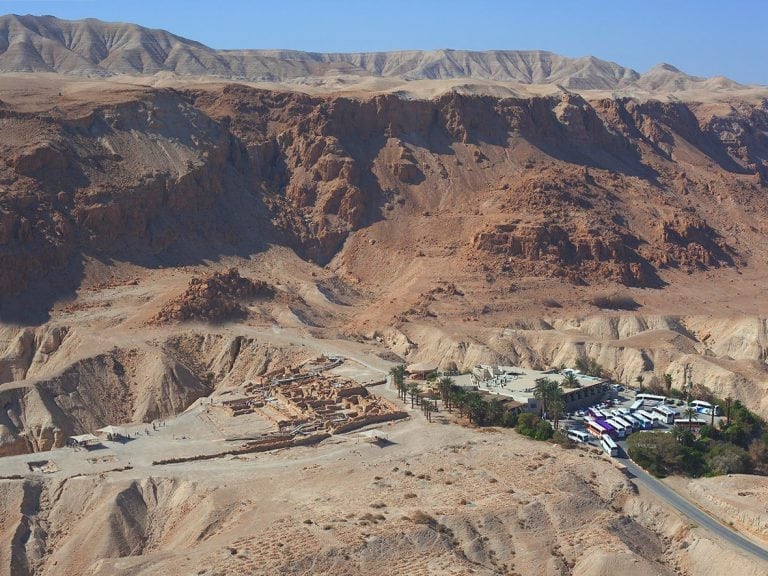 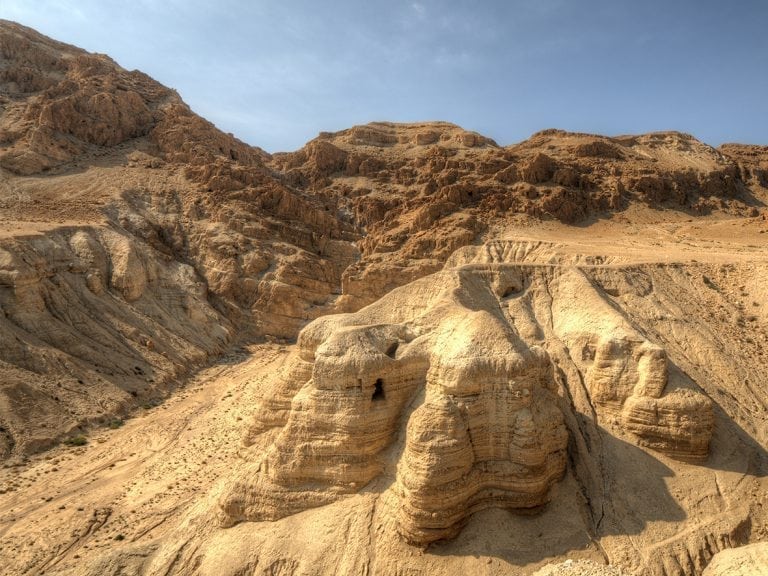 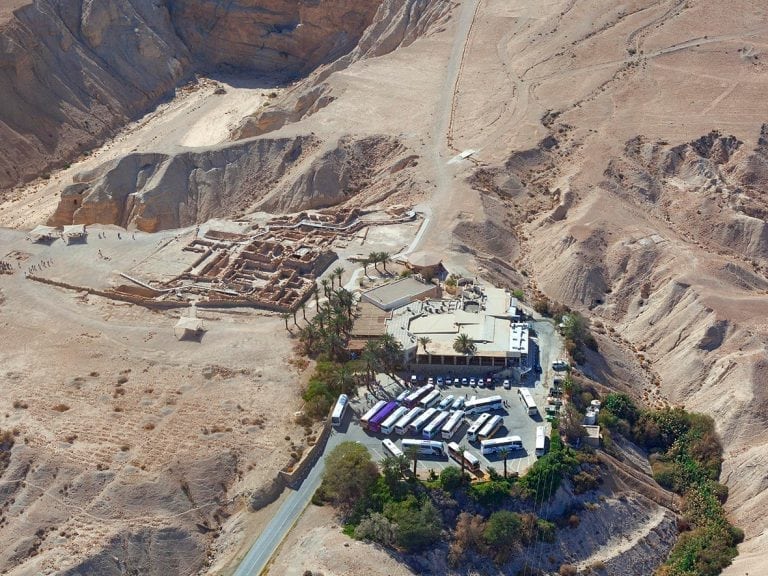 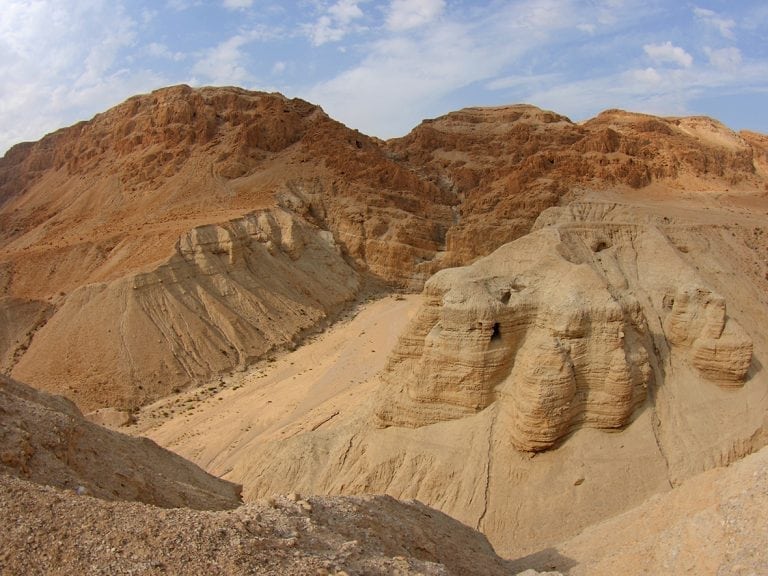 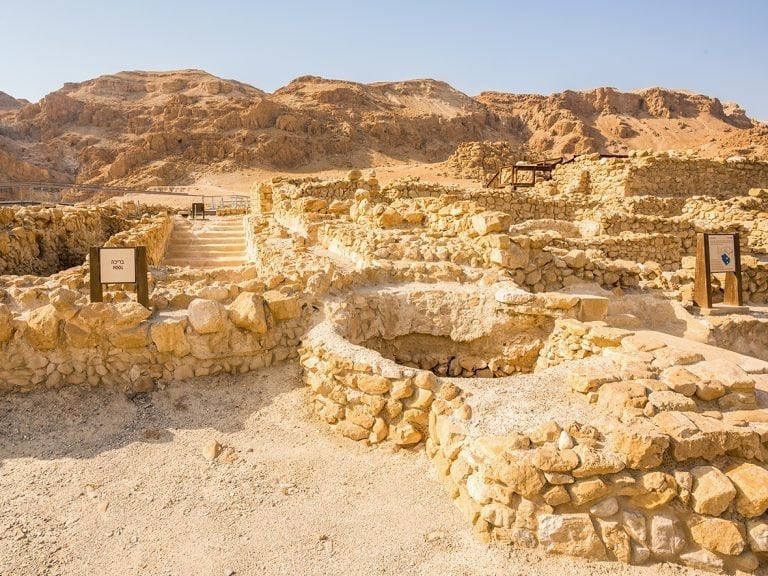 Qumran gained its present name from the Bedouin who often used its more visible ruins for shelter and eventually brought the site, Qumran, to fame when they came across scrolls hidden in caves close to the site in the middle of the 20th century – the Dead Sea Scrolls.
To understand Qumran and its many confusing or even contradictory discoveries and theories, we must first look at the excavated architecture – the community buildings and constructions; the lifestyle(s) which they seem to represent; and use simple logic too, before trying to tie in these discoveries with the findings in the cave-scrolls.
What is clear and agreed upon by academics and archaeologists, is that Qumran was:

By the middle of the 19th Century explorers and archaeologists had already come across both the clearly visible ‘tower’ at the Qumran site and the graveyard with over 1000 tombs to the east of Qumran.

Many surveys were made in the 19th and early 20th centuries even before the discovery of the nearby scrolls. Excavations under Israeli control in the early 1970s uncovered the Qumran site in detail for the first time, beneath the debris of destruction and time which had really left only the Roman-era tower clearly visible above the surface.

The ‘Refectory’ of Qumran

The discovery of a room identified as a ‘dining room’ due to an adjacent ‘clay dining vessel’ room, judging both by its size and by its long rectangular shape, similar to that of the typical ‘Beit Midrash” for the late 2nd Temple Era, led to the conclusion that this room was the one used for teaching, eating and most community business.

In most 2nd Temple Era communities, this is defined as the “Beit Knesset” (synagogue) used for all community gatherings as well as its school but would only have been used as a dining room too for wedding feasts. One type of construction is conspicuously absent from Qumran – all the buildings are community ones. No constructed dwellings of any kind have been found, suggesting they dwelt in the caves and in tents or under date palm trees around the site.

Various rooms, as well as kilns, show that the inhabitants made their living from Agriculture as well as creating their own tools, pots and processing the locally grown products such as date honey – over 100,000 date pits were found on the site.

The discovery of inkwells and many quills in another community room showed perhaps that another income for the community was in the creation and copying of the scrolls of Holy Scripture – the Hebrew Bible. This said it must be pointed out that scrolls were not discovered in the community buildings.

The discovery of the dam over the Nahal (flood torrent), which had held back the rainwater draining from the Jerusalem area and the aqueduct into which the water was directed, showed a degree of engineering skill as well as creativity.

The water was directed into many single and dual-storage facilities. ‘Single’ refers to a cistern or Mikveh (Jewish ritual purification bath); and ‘dual’ being where a cistern and a Mikveh are side-by-side, fed by a single branch of the aqueduct system.

The Scrolls of Qumran

The scrolls were all discovered too close to the constructed site to be able to divorce them from the inhabitants and life of the community.

If we take the “Scrolls of Community Rule” found in the caves, together with descriptions in the writings of 1st Century Jewish Historian Josephus Flavius (Yosef ben Matityahu), and furthermore tie in the reports of Philo and Pliny the Elder with their Greco-Roman historian background, all of whom mention the site or the sects; we can understand a community with a strictly ascetic lifestyle, its own very specific set of apocalyptical beliefs in the coming Day of Judgment, which had separated itself from the central Jewish worship site of the Jerusalem Temple. This separation is described as being due to the “wicked priest”, who would presumably have been a High Priest from the dynasties of the Hasmoneans.

In their ‘Scrolls of community Law’, the sect refers to itself as being the ‘Sons of Lightness’ whose enemies are the ‘sons of darkness’. The term used widely is ‘Yahad’, a Hebrew word meaning ‘together’, used in Josephus’ description of their lifestyle.

The word is significantly used in the first verse of Psalm 133:

“How goodly it is and how pleasant, for brothers to dwell together”.

This document, found along with the Community Rule documents, point to not a single form of religious sectarian life, but to the existence of different versions of the lifestyle, possibly co-existent, and possibly over different periods of time.

The fact that the site was not built, inhabited, and destroyed in a 200 year period of a single uniform sect occupying it, should be seen as logical, not surprising, as all religious sects develop their beliefs and lifestyle over a period of time.

To understand the reasons behind the storage of so many copies of the Hebrew Bible and other scrolls in jars in many dispersed caves around Qumran, we have to look at the historical context for the time, but also at lessons of history before that era.

During the Babylonian destruction of Jerusalem and the Temple, with the subsequent exile of the educated elite in the 6th century BCE, the Judeans and remnants of the Tribes of Israel almost lost the Scriptures of the Hebrew Bible. This is described by the Prophet Jeremiah who was present at the time.

According to a book no longer in the Jewish Canon by the 1st Century BCE – the “2nd Book of the Maccabees”, chapter 2, Jeremiah hid the “Aron HaKodesh” (referred to in English as the Ark of The Covenant) in a cave on Mount Nebo which he sealed and hid access to. Mount Nebo sits opposite Qumran on the eastern ridge.

Perhaps an explanation for the hiding and/or storage of the scrolls in the caves was the imminent Roman destruction and a desperate need to preserve the Scriptures, the work of the sect, or even perhaps, the works and Scriptures from various groups, including the city-dwelling but monastic Essenes, were given to the Dead Sea Sect to hide and protect from the Romans.

The discoveries and documents of Qumran have created more questions than answers. There is no unity of opinion on the nature of the site in its heyday, but rather, ever more theories and hypotheses have been created, causing confusion to the layman who visits the site and simply hopes to understand it in its historical context.